What celebs are doing this cabin fever season

What celebs are doing this cabin fever season

In the brave new world of social isolation, environmental rejuvenation, and too much time for deep contemplation, we see that celebs are not immune from the cage rattlin’ restlessness either. Celeb go-getters are doing everything they can to stay sane in these confining times, and much to our delight, it has triggered an outpour of the most entertaining online content. Tom Hanks was first up with his questionable layer of vegemite on toast, but let’s see now who’s topped our list this Corona season.

Oh beloved Dua Lipa. The style and pop icon has hit the green screen during isolation, showing us what a little zest and creativity can do. Lipa streamed a live version of “Break My Heart” on the Tonight Show from her living room, complete with moving visuals and superimposed back up dancers.

Lipa also managed to release her latest album FUTURE NOSTALGIA, with 11 pop bangers to get you into the homebound boogie. In an interview to TIME magazine, she spoke about her initial reservations in releasing the album during the Corona crisis. In the end however, she reminded herself of what was important.

“I was thinking of maybe moving the album, putting it out at a later time when things weren’t feeling so heavy,” she says. “But when I was playing devil’s advocate with myself, I kept going back to the fact that I made this record to get away from any anxieties and pressures of making a second record—to just have fun and dance.”

To tie it neatly all together, Lipa added a bubblegum pink pop of colour to her iconic blond streaks.

?Quarantine diaries? – this weeks experiment… pink hair. That’s kind of it really… I haven’t acquired a new skill but I have joined world of warcraft and I have two pets on it called mintsaws and little sheena (one’s a dragonhawk and one’s a tiger). I’ve attempted a few morning facetime workouts with my friends and because ive still been doing bits of promo from home – a massive shout out is due to all the journalists who have been so patient with me while im on my quest to becoming a true tech wiz. Thank you to my @warnerrecords fam for my lovely flowers tooooooo ?❤️

I guess we shouldn’t be surprised by that one though, we already knew Lipa for her many cameleon looks. But we still love it Lipa!

Britney. Britney. Britney. Some of us may be worried about her mental health with her exuberant dance moves and high energy workouts, but mainly we are proud, we are inspired, and more importantly we are entertained. Britney has always blessed the gram with quirky wardrobe updates and boyfriend chef shows, so we’ve always had a good idea of what she’s up to. Yet, now, with COVID being our ephemeral lock and key, Britney has gifted us with more than we could hope for.

Enough said ??????? and thank you to all of the healthcare workers tirelessly working to keep us safe during this time !!!! #WorldHealthDay #ThanksHealthHeroes

Isn’t Britney the cutest? Sending her love to the essential workers who are busting their buns for us, with an even more delightful shake up of her pop classic, Hit Me Baby One More Time.

God bless you Britney and your gold heart :’).

Next up we have Kylie Jenner, who has sent a deep shock through the internet. This time, not with her sweetly tuned voice, but in what only can be called the most incredible make under. On Sunday, Jenner was seen out in Beverly Hills LA, in casual sweats, no make up, and a messy bun. Fan’s were left confused and amused, with the image coming as a sober reminder of what 4 hours in a mirror and a little photoshop can do.

Makeup consists of polyjuice potion…theres no way both of these are Kylie Jenner… pic.twitter.com/aPZXvr7CHi

This is probably the only picture of kylie Jenner that i find it relatable pic.twitter.com/ffdlktz16c

No shade Kylie, but it’s just a nice reminder that the only difference between me and you is a billion dollars.

Adele has surprised the internet with an equally unrecognisable transformation. Adele took to instagram to thank healthcare workers for risking their lives, and to thank all her fans for the all the 32nd birthday love.

Thank you for the birthday love. I hope you’re all staying safe and sane during this crazy time. I’d like to thank all of our first responders and essential workers who are keeping us safe while risking their lives! You are truly our angels ♥️ 2020 okay bye thanks x

But it wasn’t her heartfelt caption that caught eyes, but rather the double take that had celebs and fans questioning, ‘Adele is that really you?’ 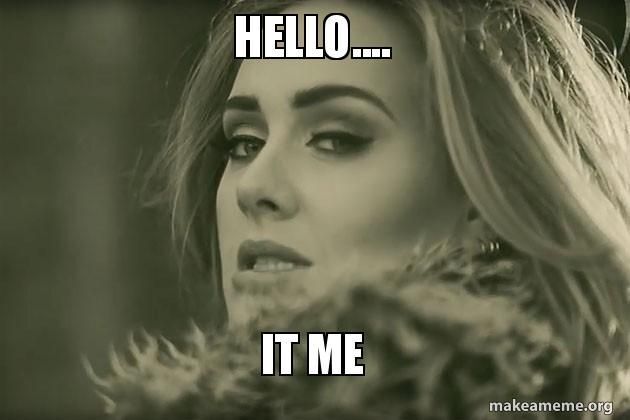 While her noticeable weight loss had some fans celebrating, others were criticising fatphobic beauty standards and their harmful effects.

I see that Adele is trending because people are saying how gorgeous she is since she lost weight. Y’all, we’ve been over this…

We celebrate people for the person they are not by their appearance. This type of talk leads to young girls dieting & if they are predisposed, to developing an ED!

No one should be celebrated for losing weight!

I for one, have always admired Adele for her self confidence, and will continue riding that train.

5. Cardi B
Cardi B is known for her outrageous presence in the online world, with her hilarious yet insightful monologues and her invaluable meme contributions (see: CORONAVIIIIRUS).B has once again outdone herself. In B’s most recent masterpiece, she has filmed herself in what can only be considered as an epically painful video of getting her coochie waxed. With, what looks like drama fit for childbirth, B was screaming “wait, wait, wait!” Begging her gloved beauticians to hold her hand, and was panicking before any wax had even touched her skin.

Thank you B. We see you, we hear you, but more importantly, women around the world UNDERSTAND you.

Last on our list is J Biebs and his wife turning back the clocks to childhood games. Bieber posted to instagram a wholesome video of him and his wife playing “The Floor is Lava.” In a cute grey onesie and fluffy ear-flap hat, Bieber is seen hopping over his designer furniture, in a desperate attempt to escape the quickly melting floors.

THE FLOOR IS LAVA

What can I say Biebs, our hearts too are now lava.

The Dare To….Australia website and products are fast becoming Australian icons and a great option for natural, or